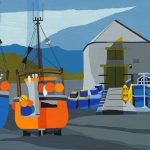 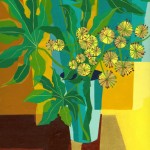 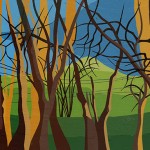 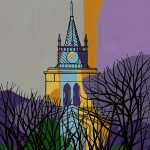 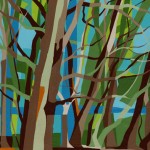 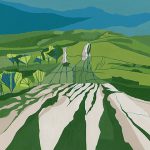 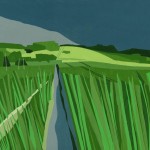 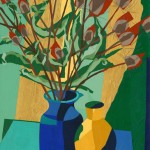 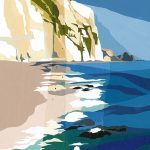 
Christine paints contemporary landscapes, characterised by strong lines and shapes, flattened planes and the use of vibrant colour. She grew up in Trinidad and the bright light and vivid colours of the tropics still exert an influence in her paintings.

She draws inspiration from the countryside where she lives, on the Buckinghamshire border with Hertfordshire and Bedfordshire: the gentle beauty of the Chiltern Hills, views from the Ridgeway, the patterns of fields scored by furrows and bounded by hedgerows, the bare trees of winter, the colours of crops and of the seasons.

Other parts of England feature in her paintings too: the South Coast, Devon, Cornwall, Lincolnshire, Shropshire and the Lake District.

Another aspect of her work is her still life paintings which often include flowers for their exuberant colours and organic shapes.

In her mixed media work, Christine begins by drawing the composition onto board or canvas. Next, she uses tissue to loosely block in areas of colour, relishing the unexpected shapes which emerge from torn edges and overlapping layers. The tissue is glued to the board or canvas. The drawn composition is important to her; when it begins to disappear beneath the layers of tissue, she re-draws it. She then paints in acrylics onto the collage base, focusing on the original drawing but also incorporating many of the shapes which originate from the tissue layer. Her aim is a synthesis between the drawing and the more abstract collage, with the painted layer bringing the two together.

Her background is in illustration and design (First Class BA Honours Degree, Manchester, 1982). Most of her illustrations feature in publications for environment and development organisations (such as IUCN in Geneva and IIED in London).

In 1998, she won the Sunday Times/British Airways Competition to design a tailfin for BA as part of its ‘Global Images’ campaign. Her artwork, inspired by British canal art and titled ‘Grand Union’, decorated BA tailfins and buses for several years.

Christine is a member of the Bucks Art Society, the Visual Images Group and Artists Network Bedfordshire.

Her work can be seen at www.christinebass.blogspot.com.